There are 2 kinds of alcohol addiction. 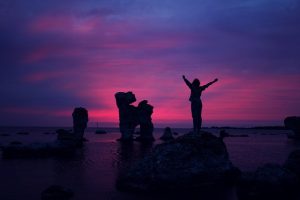 What I mean is, addiction functions in two different ways, and on two different levels, for all of us. Understanding this is an important part of alcoholism recovery.

Physical addiction and alcohol dependence develops from a very biological mechanism – the receptors in the brain become habituated to a certain amount of alcohol being consumed, and so increasing amounts of alcohol are required in order to achieve the same emotional feeling.

The same applies for drug misuse and drug rehab.

Essentially at this point if we detox or withdraw from alcohol or drug use, those same neuro receptors in the brain now not only do not have any of the original substance to stimulate the positive feelings, but they have less than they started with (effectively) since they had become used to the previous amounts, on a continuous basis.

The individual goes into what we label as alcohol withdrawal – with the characteristic physical and emotional symptoms that go with that – shaking, sweats, tremor, motor reactions distorted, etc

Emotional addiction, and the behavioural mechanisms in alcohol addiction, occur much more subtly, and can be difficult to detect, and almost impossible for an alcoholic to perceive, or admit to.

Emotional addiction occurs when we adopt a way of being, or behaviour, consistently over time, that gets us a certain positive (and usually temporary) outcome.

It’s a means to get what we want in the short term, without facing up to the underlying issues which need to be addressed.

We all do this, in different ways, in our lives. An example from an alcoholic’s life could be – on one occasion, when his wife questions him re his drinking, he denies everything. When his wife is unconvinced, he becomes aggressive – in his unconscious mind – this is to protect his access to his coping mechanism. Upon seeing the aggression, his wife rescinds, and accepts his explanation.

It only takes a few repeats of this episode before the alcoholic’s unconscious mind learns “Ahhh – *this* is the way to continue to get access to my coping mechanism.”

Thereafter, upon any dispute about his drinking, the alcoholic becomes triggered into rage instantly – even himself completely unaware that behavioural dependence has occurred – he has started making behavioural modifications as a result of emotional addiction, and an underlying lack of willingness to face up to the issues behind his addiction – it becomes easier to avoid, lapse into coping mechanism behaviours, and act out, to protect access to his coping mechanism, than it is to admit responsibility, and get help.

How Much Is Too Much?

The question then becomes – how much of an alcoholic’s overall addiction – are these behavioural elements, designed to temporarily continue to be able to access alcohol – and how much is driven by the physical addiction to the substance of alcohol?

And I think you know the answer.

The reality is a mix of both, of course.

Usually the alcohol itself has been used as a coping mechanism on a short term basis or to relax from a particularly stressful set of circumstances in the past.

But even if addiction to alcohol as a coping mechanism doesn’t develop at this point, the awareness, at an unconscious level – that alcohol works – it works to help me relax without having to face up to my problems – has already begun.

And so it becomes much easier to turn to alcohol addiction again in future, when stressful events occur.

Once this happens, and the individual is drinking to cope again, it takes only a certain amount of consumption over time, to develop a dependence in the brain, as per our previous chemical explanation.

And then the behavioural mechanisms kick in to protect the *ongoing* access to the coping mechanism.

So the overall pattern in the alcoholic’s lifecycle is more likely explained by this pattern, over time:

Does this resonate with you?